Kiriya is a young woman with medium long red hair and yellow eyes.

Kiriya was raised in a martial arts dojo along with three brothers. She read shoujo manga for the first time in college and was instantly hooked. But as she reads the love stories, she gets too excited and lashes out using martial arts, often resulting in broken walls. She also has the habit to toss and turn a lot while sleeping. Because of her stoic personality at school, she secretly feels pressured around the other students due to wanting to be admired and set a good example for them. After Koshi begins treating her as a girl, rather than as a tomboy, and offers his aid to her does she begin to grow feelings for him. This leads her to acting more embarrassed and girly like around Koshi.

Mineru Wachi finds Koshi Nagumo collapsed on the street from hunger and takes him to her dorm. After giving him food and he meets with the other residents including Kiriya. Hearing his story, Mineru proposes he lives there and works as dorm mother. Initially Atena Saotome is against it, but later agrees.

One night, while reading shoujo manga, Kiriya breaks the floor and falls into Koshi's room. Revealing her embarrassing hobby, she starts to view Koshi as her little brothers and even wrestles with him. As she toss and turns a lot, she wants to stay and sleep in his room, but Koshi couldn't take it and decided they switch rooms for the night.

In manga chapter 7, when Koshi is leaving the bath and she is entering, they bump into one another and accidentally end up in a sex position when atena finds them. Even though Atena called it docking in, it is still unclear what happened.

Her feelings for Koshi deepen after he helps her run her families Christmas party and gives her a sincere present. This almost led her to kissing Koshi romantically until Serene interrupted.

During New Years, when she a Koshi become Miko’s as a favor, Koshi angrily stands up to a bunch of delinquent boys who littered after she worked hard to clean up. When Koshi got hurt a little, she drove them off and had a deep conversation with him. She reveals her belief that she is too masculine and hardly anyone would see her pretty in woman’s cloths. Koshi firmly denies this and gives her more confidence in her self image, deepening their bond further. 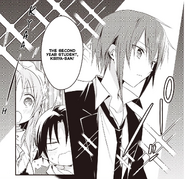