Frey (フレイ, Furei) is a character in Megami-ryo no Ryobo-kun. She is a resident of the Seikan's "Goddess Dormitory" who is a fashion aficionado and avid cosplayer that loves making dresses.

Frey is a young woman with wavy hip-length blonde hair that takes on a green color at the ends with bangs covering the right side of her face, brown eyes and large breasts.

Frey is bashful and happy mostly, and strong headed and stubborn as shown in her making people wear an outfit no matter what.

Mineru Wachi finds Koshi Nagumo collapsed on the street from hunger and takes him to her dorm. After giving him food and he meets with the other residents including Frey. Hearing his story, Mineru proposes he lives there and works as dorm mother. Initially Atena Saotome is against it, but later agrees.

While Koshi does his chores, Frey would often call him into her room and force him to wear an outfit she made. Even when he tries to state that he is working, Frey would explain that part of his duty is to get to know the residents to make him stay. 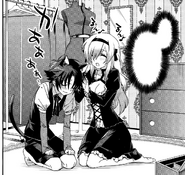 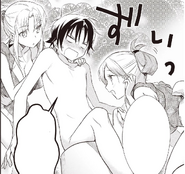