Atena Saotome (早乙女 あてな, Saotome Atena) is a character Megami-ryo no Ryobo-kun (anime). She is a first year student who lives in the Seikan's "Goddess Dormitory".

Atena is a beautiful young woman with hip-length pink hair that is braided in the back while she has a yellow hairclip with bangs hanging on either side while she has a single hair strand sticking up, blue eyes and large breasts.

Atena is quite sheltered growing away from boys. As a result, she can't handle being near them and would get a severe nosebleed if she touches one. When Koushi Nagumo comes to her dorm, she refuses his stay, but considering what he's been through, she accepts him. While wanting to get closer to him, he ends up calling her sister, which makes her feels something she never experienced before and asks him to continue calling her sister. This causes her to become a total brocon. This leads her to trying protect him from the other girls in the dorm from their indecent acts. However, as her time with Koushi grows, her feeling become more romantic towards him, even once trying to kiss him.

Koushi/ Koshi Nagumo is one of Atena's Most Connected and loved person. She, At first, didn't allow Him to Enter in the Dormitory and Be their Dorm Mother. But Slowly, seeing Koushi's Concerning, and Beautiful Personality, She accepted Him, but still didn't Trust Him fully. Day by Day she Certainly started Trusting Koushi and he became the Only male With whom She could trust. She got a certain Sensation whenever Koushi called her "SISTER". As time Went She Developed a Soft-Corner for Koushi.

She Became a competition for Sutea as Sutea also had a love for Koushi/Koshi. But Atena always wanted to have her as a friend.

Mineru Wachi finds Koshi Nagumo collapsed on the street from hunger and takes him to her dorm. After giving him food and he meets with the other residents, hearing his story, Mineru proposes he lives there and works as dorm mother. Only Atena Saotome is against it as she can't handle being close to men. Koshi decides to turn the offer down as he doesn't want to make Atena to not feel at ease at her home. Seeing how considerate he is, Atena decides to accept him and allows him to be the dorm mother.

Due to her personality, Atena keeps away from him, but seeing the other girls getting closer to him, she starts to wonder how he won them. When Koshi decides to cook for them, Atena decides to tag along. On their way, she ends up bumping into lots of guys and Koshi ends up playing as her little brother and excusing her. Feeling something she never felt before, Atena wants Koshi to keep calling her sister as she gets excited hearing it. Seeing the other girls often ending in weird situations or with exposing clothes, Atena decides to protect Koshi from them and to enforce public morals in the dorm. 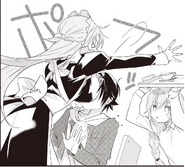